Julie is back and we've designed a home town ride through Brunswick and up to the old Essendon Arerodrome - keeping it a city ride with a nod to the weather. We're proud to show you some Brunswick gems, and then take you back roads to Essendon Aerodrome. This ride is under development - a recce ride will reveal more and jog some memory.

Breakfast / coffee at Park Street Cafe, - MAP- from 9.30 AM. (Technically 815 Nicolson St, North Carlton) Enter Park Street from Nicholson St, and park on the grass right out front of the cafe. Good cafe and atmosphere. Depart at 10.30 AM 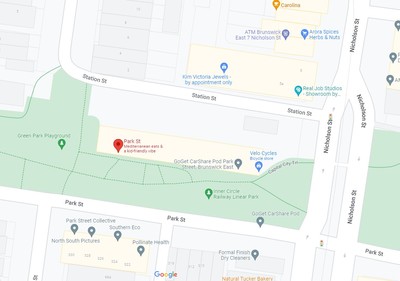 Greg: "I will take to where I grew up - a weatherboard box in Oak Park, in the valley below Essendon.  I haven't   been back to what was then the 'outer suburbs since I left in 1975. But we'll follow the route I used to pedal by bike with friend Alan up to Essendon Aerodrome. We rode up to big events - you know, the Rolling Stones arrived in 1966. Not that I could see anything as a little kid, but the chips were good! On the way we will pass the infamous trestle bridge - now a manicured park, but then an exciting wilderness where rocker gangs trashed and burned stolen cars."

Essendon Aerodrome. The grounds have been redeveloped into a car sales yard, but the terminal building is remarkably the same. The tarmac, fenced waiting area, and the towers in the video are all still there. Of course there'll be plenty of opportunity some Vespa / plane photography.

We'll ride back to Essendon where we can stop for a farewell coffee or lunch at Johnny Pumps cafe.

This ride will suit all bikes, and all members, and new members come along too. This is for you.