This is a taster ride. It is open to all members, and particularly those registered for the big ride the following week.

It is a city ride so it's hard to get around. It will cover the city locations relevant to the ride. The ride next week will leave from Essendon and won't include this ride.

It's a small tour around Melbourne, seeking out the beginnings of the Burke and Wills story.

Final details to be published soon.

Unfortunately the famous statue is currently in storage due to the underground works in the city.

But - We'll meet for breakfast. Then visit:

Then we'll have lunch!

The slab is transported to Melbourne General Cemetery, and the crowds at the funeral. 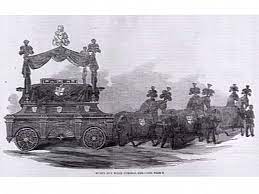